Icon fonts are a popular way to include simple vector graphics on web pages.

To combine icons into a standard web font:

Unicode and how to use


The unicode private use area is a special unicode range left undefined by the Unicode Consortium so that third-parties may define their own characters without conflicting with Unciode Consortium assignments.

A custom unicode character added to a font can be used on the web by including an HTML entity reference.

For example, the entity reference &#57344; included in an HTML document will reference the first slot in the Unicode private use area. This is a decimal value. Some users may find it convenient to use the equivalent hexadecimal value instead, &#xE000;

This is a subset of Source Sans Pro Bold Italic, incorporating an icon from an icon font:

As an alternative to direct use of HTML entities, it's possible to include HTML content through CSS. This can be achieved with the use of a CSS2 :before or :after pseudo-elements.

For example, to include the same unicode character using CSS :after, you may use CSS escapes as follows:
to achieve a similar result:

Note that escaped CSS character references should always be set in hexadecimal.


The same system can also be useful if a font is missing a particular currency symbol: 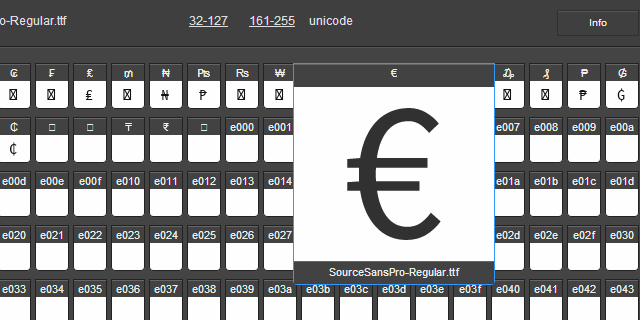 Font Combiner is in active development and will include more unicode source options in due course.